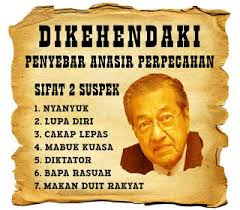 Mahathir's latest rant on his blog post today titled "FDI" shows that he is stuck in the past and still believes his old ways work.

He continued to defend his old model of manufacturing investments:

2. ​Accordingly Malaysia decided to invite foreign investors. By this we meant that foreign manufacturing companies could set up labour intensive plants in Malaysia to produce for export. The Government would provide land and infrastructure and give tax holidays.

3.​ FDI solved most of our unemployment problem and enriched the country through industrialisation and inflow of capital. But a large amount of the capital was raised domestically.

However, the problem with this is that we no longer have an unemployment problem. In fact, due to reliance on cheap labour, manufacturing requires huge amount of foreign workers.

Walk into any factory in Malaysia and you will see that the majority are foreign workers nowadays.

What happened in the past is that after a specific period of expansion, foreign manufacturers got free or cheap land,  subsidized electricity and gas and don't pay taxes due to the tax holidays.

Not only do their foreign labour repatriate their wages but the foreign companies too brought back all their earnings.

If we continue to do what we did, we will forever be stuck in the middle-income trap and forever be competing based on low-cost basis as we did before - which had depressed our salaries for so long.

This is why since 2009, the govt's focus has changed from measuring just GDP but changed to Gross National Income or GNI, which removes the impact of foreign-ownership.

Malaysia also started to focus on higher value-added industries with increased automation. Various incentive are still offered to them.

But a new focus is on the services industry and services exports. Services are now the biggest sector and comprised 53.9% of our GDP in 2015. In a sign of success, our services sector exports continue to grow with RM135 billion recorded that year.

In the USA, the services sector comprises 80% of their GDP and 81% of their employment.

As Malaysia continues to develop, manufacturing, especially foreign-owned manufacturing, is no longer enough. We must move on to be a more service-based economy - where GNI and locally retained profits are higher.

Mahathir then went on to attack the Forest City project and said that this is Najib's idea of FDI where land is sold to foreigners.

He ridiculously said this is equivalent to Singapore being sold to the British.

Firstly, Forest City itself was never Tanah Melayu. In fact, it wasn't even land. Forest City is four artificial islands reclaimed at the Malaysia-Singapore border.

Secondly, how can you equate selling an entire existing island to be made a separately controlled country to an investment in real estate - especially reclaimed real estate?

If that is the case, the British would also have sold their country to Malaysia since Malaysian GLCs are the buyers and owner of Battersea, England;s largest real estate development in recent years.

Of course during the construction phase of Forest City, there will be much work for local construction and service providers. China can't do everything themselves.

Contractors in Johor knows that there has been much work parceled out for Forest City and other property projects in that state. All of this drives our service industry and generates economic activity.

Also, the target market for Forest City are rich Chinese, Singaporeans wishing to live near to Singapore but on a cheaper cost and also well-to-do locals.

These folks are expected to continue contributing to the local economy as they will require services.

And as they now stay here, they can then use their wealth and business acumen and connections back home to bring new investments and trading opportunities to Malaysia.

This is how Singapore does it when they welcome rich people to invest and stay in their island.

As the world becomes borderless and international trade grows, it is inevitable that there will be more people who no longer resides in their own country.

Mahathir's fear-mongering of us being colonised or us jual negara is unjustified.

After all, they can't bring the four artificial islands back home.

If you look to the future, the fear is not about building these places and having foreigners stay in Malaysia.

The fear is that foreigners won't want to come stay in Malaysia.

All Mahathir has done today with his outdated thinking in his blog today is just to incite unreasonable fear in people for political gains and to upset the Johor Sultan.